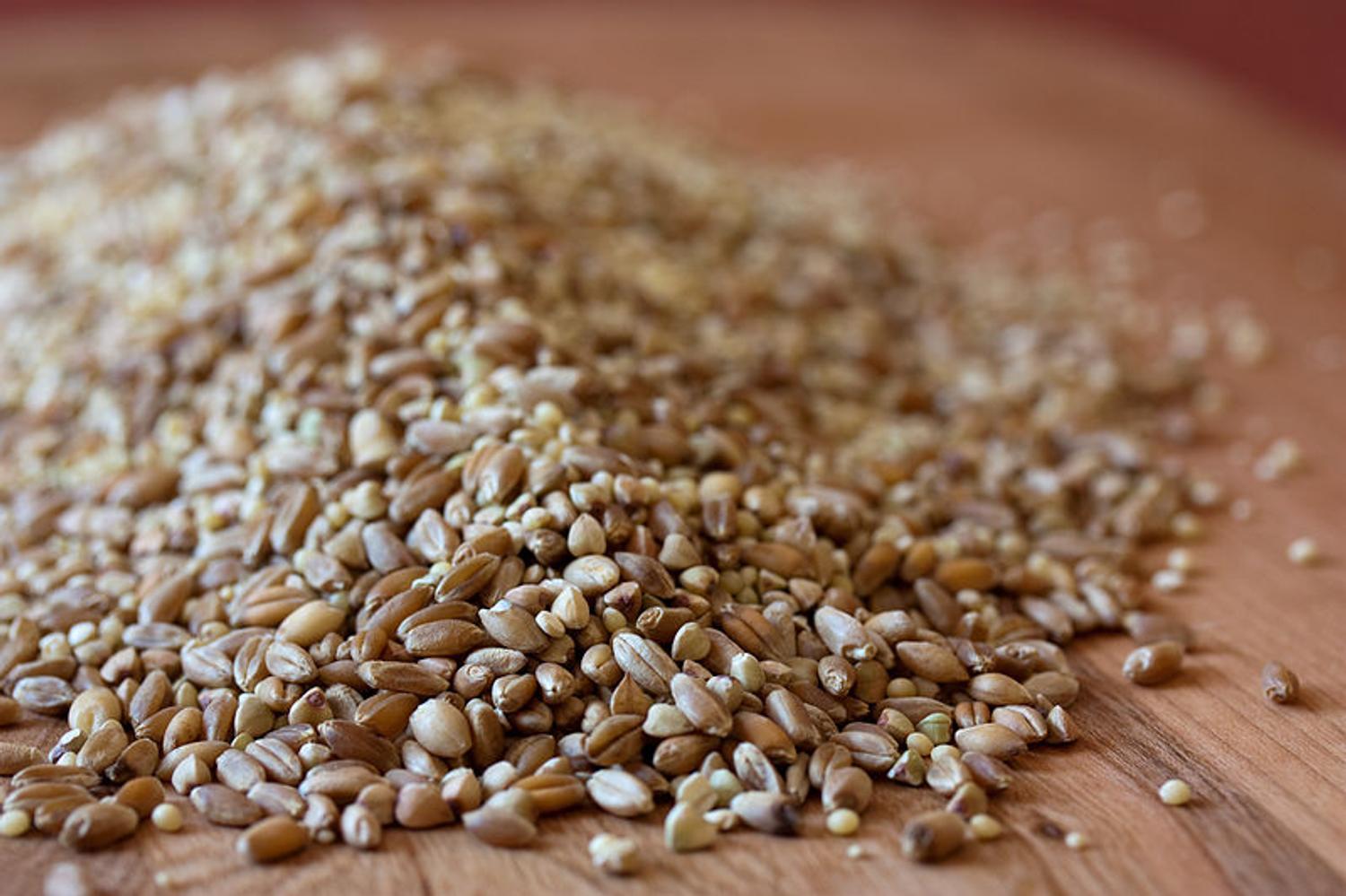 Humans have cultivated grains for 10,000 years. The fruit and seeds of cereal grasses can’t be digested raw so they must be prepared before cooking. A single grain is sometimes called a kernel. They have been an essential part of human society due to being packed with macronutrients, and the fact they can be stored for long periods of time.

A kernel is made up of three parts: bran, germ and endosperm. The bran is the outside layer and is fibre-rich. The germ is the inside layer and is rich in nutrients. The endosperm makes up the rest of the kernel and contains some vitamins and minerals. Whole grains retain the bran and the germ. Refined grains remove the bran and germ. The bran and germ makes whole grains go off quicker than refined grains. However, the bran and germ are the source for most of the nutrients we need. The germ contains lots of vitamins and fatty acids while the bran is rich in fibre. To make up for this, refined grains are usually fortified with vitamin b and other minerals.

Whole grains are great – they may be able to reduce the risk of heart disease, diabetes, and cancer. Moreover, they are naturally nutrient rich – they are usually seeds so therefore potential plants! Here we list 5 of our favourite whole grains (in no particular order) and all you need to know about their nutritious goodness.

Oats almost never have their bran and germ removed in processing, and have a unique sweet flavour. As they go rancid quickly, they are usually steamed and rolled or steel cut into small pieced. Rolled  oats are soft, chewy and cook quickly. Steel cut oats are crunchy and nutty in flavour and take 20-30 minutes.

You can use oats in more than just porridge and granola bars. Try making delicious burgers or crumbles, BBC Food has plenty of recipe ideas.

“While no single food can supply all the essential life sustaining nutrients, quinoa comes as close as any other in the plant or animal kingdom.”

These were the words of Phillip White in a 1955 paper on “Edible Seed Products of the Andes Mountains”. Quinoa has been classified by the UN as a ‘super crop’ as it is drought resistant and grows on poor soils without irrigation or fertiliser. It is a complete protein, with a high ratio of protein to carbohydrate.

Botanically not a cereal grain, it is closely related to beets, chard and spinach. It grows on bright stalks up to nearly three metres tall. Seedheads are large and can range from red, purple and orange to green, black or yellow. We are more used to white quinoa, but black and red varieties are easily found in supermarkets.

Originally cultivated in South America, quinoa was sacred to the Incas. Called chisaya mama, the mother of all grains, the emperor would ceremonially sow the first seeds.

Gluten-free, you can use quinoa flour and you might even come across quinoa bread in health food stores. Make sure to wash quinoa before cooking, it has a bitter coating called saponin that fends off pests.

Wheat is the third most produced grain in the world, however it is usually consumed in its refined or enriched. Whole grain wheat comes in a lot of different forms: einkorn, faro, spelt, khorosan, durum, red wheat, white wheat, bulgar and freekeh! We’ll touch on a few varieties below.

Rye was considered a weed for a long time after it first appeared in wheat fields. Eventually, farmers realised that rye grows more quickly than wheat, and flourishes in both floods and droughts. Because it thrives on poor soil and in cold, wet weather, it is popular in colder temperate climates.

A rich and versatile source of dietary fibre, rye is also known for its high antioxidant activity. You can make yummy cakes, and nutrient rich breads. When using rye berries, make sure to soak them overnight to shorten the cooking time.

Wild Rice is actually not a type of rice. It is a semi-aquatic grass that historically grew in lakes, tidal rivers and bays. Wild rice evolved to ripen its seeds at different times to avoid threats from pests and frost.

Following traditional methods, uncultivated wild rice must be harvested by beating the ripe seeds into canoes with sticks. Commercialised farms have to make sure that water depth is consistent, and when the stems are stronger and the plant ready for harvest, they drain the water and harvest with combines.

Wild rice is difficult to grow with low yields, so tends to cost more than other grains. Usually it is mixed with other grains. Nonetheless, it is higher in protein than most other grains, a great source of fibre, folate, magnesium, phosphorus, manganese, zinc, Vitamin B6 and niacin!

Wild rice is very versatile, as a side or as the main ingredient, its nutty flavour makes it irresistible! Here are some recipes to experiment with.

Whole grains are a great source of nutrients and energy. Rich in fibre, they are great form improving your bodies functionality and decreasing the risk of harmful conditions. On top of that, whole grains make you feel fuller for longer! Usually rich in B vitamins and a whole lot of good stuff that help your body get all the nutrients necessary.

None of the advice given on this website is to be considered as medical advice, however these recommendations are in line with those by public bodies. If you have a medical condition please discuss with your doctor before considering any changes to your diet or lifestyle.