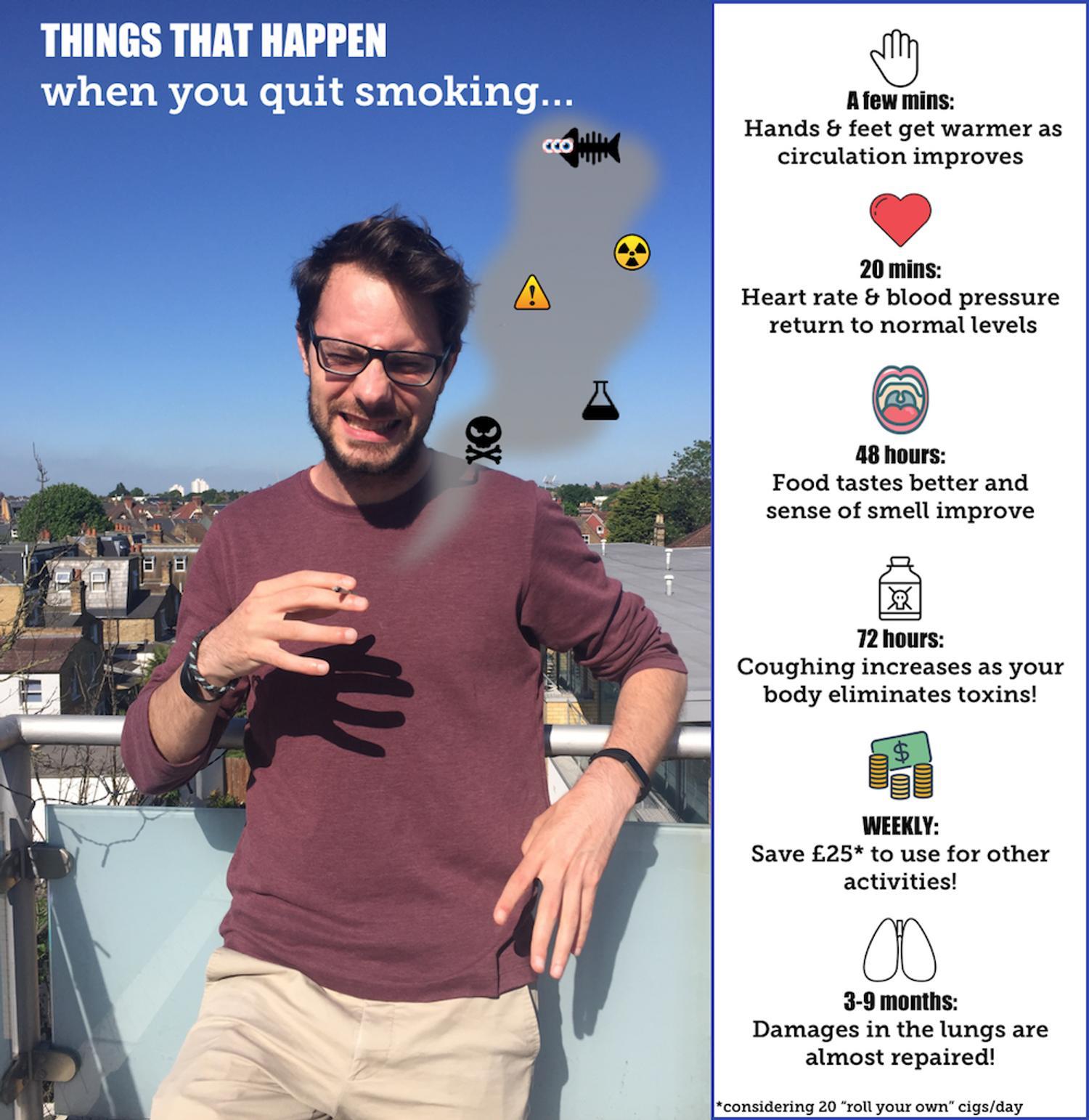 How to Quit Smoking: 1 Week Challenge

How to Quit Smoking: 1 Week Challenge

Here at GreenJinn, we like to always find new ways to be healthier whilst having fun and saving money. So, this past week, we challenged our colleague, Rob, to start out on his very own hard but worthwhile quest to quit smoking. It’s been a very interesting and, at times, difficult week (at least for Rob!), but now its time to share the results! We often tend to think of getting healthier as an expensive hassle or burden. But, for Rob, it turned out to be physically and mentally stimulating and cheaper than well established bad habits!

We chose this week for our Quit Smoking Challenge, since today is World No Tobacco Day (founded by the World Health Organisation). This year’s theme is “Tobacco – a threat to development”. In short, the aim is make people aware of how cigarette waste damages the environment. The campaign encourages governments to ban tobacco marketing, raise tobacco tax and make more and more places smoke-free.

Find out how Rob got on with his own no tobacco campaign and how you can stop smoking too!

Rob has been smoking heavily for the past 7 years, getting through 20 cigarettes a day! He’s been smoke free for 1 week now. It may not sound like a very long time but they say that the first step is always the hardest. He’s got a long way to go yet, although he has already taken a big step on the road to stopping smoking. As his first week draws to a close, we thought it would be the perfect time to ask him about how he has been finding the experience.

Why did you decide to stop smoking?
“Initially, I was challenged by friends and colleagues to stop. I’ve always wanted to cut down on smoking but it’s just been difficult to put my foot down and make today the day that I stop. Seeing as I was being encouraged by those around me, I thought I’d stop for a while and see how I feel. I want to play more sports and breathe easier.”

Day 1: The first day was tough. When I saw the sunset in the evening, I found it extremely hard not to have a cigarette, the good weather made it even more tempting.

Day 2: This was definitely the hardest day. I tried my best to focus on work, but the cravings were still really intense.

Day 3: Easier than expected, although I was coughing a lot in the morning. I kept myself occupied and managed to resist smoking even when offered a cigarette when out with friends.

Day 4: I really wanted a cigarette when I was watching the football game at the pub but eventually the cravings went away and I enjoyed the day regardless.

Day 5: The bad weather helped as I wasn’t as eager to go outside to smoke. I went for a run later in the day and was surprised that I wasn’t tempted to smoke before/after as I would normally.

Day 6: I thought about smoking when I first woke up, but I’m used to this feeling now. I also received news of a family member passing away, so it was definitely a struggle not to roll a cigarette.

Day 7: I had to fly overseas to attend a funeral. Personal grief and airline customer service: what a combo! Normally, I would have smoked double the number of cigarettes, compared to usual. I’m now realising how stressful smoking can be… wait wait wait, wasn’t I convinced it had the opposite impact?! What a nice feeling, not having to care about where I left my filters, papers, lighter(s) etc.

How has your experience been so far?

“Overall, it’s been much easier than I thought it would be, especially since I was such a heavy smoker. I haven’t felt any major health benefits so far, but the feeling of freedom from my dependence on smoking has been amazing! It’s really keeping me going. I find myself craving a cigarette at certain times of the day, it just goes to show how deeply it’s embedded into my daily routine. I now notice all of the moments in which I would’ve smoked, anything can be a trigger! I can see now how smoking makes your mind lazy, it’s an easy way out of every situation, when your body is tired, when your mind is bored or stressed you are feeding it with nicotine instead of listening to what you actually need.”

What has been helping you through?

“The thought of all the money that I’m saving is a huge motivator for me. I’ve been thinking about what I can spend that money on. £23 saved in just a few days, that’s around £1400 a year! I’ve always felt a little stupid for spending so much on tobacco. My family doesn’t like that I smoke and so that has also been at the back of my mind over the past few days. I’d like to make them proud. There’s an app called Smoke Free App that I’ve been using too, it really helped me get through the first couple of days when I was looking for a reason not to smoke.”

What are your plans for the future?

“Hopefully, I’ll be smoking a lot less. At the beginning, I wanted to do a 7 day smoke free challenge and I had no plans to keep up the non-smoking. However, now I think I will be keeping it up! My goal is to eventually quit smoking, except for on social occasions. I want to be free of the addiction, not craving a cigarette first thing in the morning. I think the best way forward for me is to set myself small, achievable goals rather than commit to never smoking again. It’s like climbing a mountain. You look at the next step first, instead of looking at the seemingly unreachable peak of the mountain.”

If you’re going to be following Rob’s example and quitting smoking, check out the video below. Find out what happens to your body as soon as you put out your last cigarette.

If you’re in need of some extra assistance in cutting down on cigarettes, there’s a ton of resources out there for you to make use of…

How to Quit Smoking: 5 Tips to Ditch the Cigs

1. Use a quit smoking app for motivation

They say that there’s an app for everything and quitting smoking is no exception. Rob recommends the Smoke Free App. It doesn’t tell you off or make you feel guilty for sparking up. Instead, it lets you know exactly how much you are gaining. It displays the money you’re saving and the health befits you should be feeling. The app’s developers claim that it has been proven to double your chances of quitting for good.

Exercise is free, fun and an extremely effective tool for anyone looking to beat their smoking habits. It can curb your cravings and give you the release that you would get from nicotine. Withdrawal symptoms and cravings for cigarettes will decrease during exercise and can keep them at bay for as  long as 50 minutes afterwards! Just 10 – 30mins of exercise a day can make a huge difference to your smoke free efforts. So, maybe try reaching for your running shoes the next time you feel like having a cigarette. See Everyday Health for more. Still not convinced? Then watch this short video from Truth of Addiction below.

3. Read self help books for guidance

If the weather doesn’t look inviting, there’s plenty of books available to give you encouragement, knowledge and advice. This is perfect for busy people, you can get all the guidance you need anywhere, whenever you have the time. Finding out exactly what tobacco can do to you as well as the benefits of living without it can put you off cigarettes in a big way. Allen Carr’s Easy Way to Stop Smoking has some fantastic reviews, with many people saying it’s the reason that they stopped smoking, including David Cameron and Richard Branson. The Power of Habit by Charles Duhigg is another great read. An entertaining yet useful guide to habits and how to change them. Some smokers have also used this book as a tool to help them through the quitting process.

4. Join a community for support

Having the right support can be a crucial factor in the war on tobacco. Whilst having supportive family/friends is important, sometimes you may find yourself needing to talk to people going through the same thing as you. Not only do other’s have advice to offer, but it can sometimes be enough just knowing that you’re not in it alone. For the social networkers, Quit Smoking Community has over 20,000 members on Facebook. However, if you feel in need of a face-to-face meeting, the NHS have local support groups all over the country.

5. Mediate to relax and be mindful of your triggers

Believe it or not, mediations has actually been proven to help people stop smoking. It reduces stress, which is one of the main triggers for smoking. It also makes you more aware of your habits – switching off your automatic tendencies to smoke. There’s no need to join a class, since you can get started at home with this Free Guided Mediation (and many others – just google it). If you’re short on time, check out this 15min podcast from Headspace to learn an ancient mindfulness technique to help you kick the habit (and you can use their meditation app too).

Nobody said giving up smoking was easy. It’s definitely worth taking some time to decide what the reasons for you quitting are and how important they are to you. This way you can set yourself sensible goals. Quitting tobacco can be difficult, but a little planning ahead and encouragement can be all it takes to throw out the packets of cigarettes or tobacco pouches once and for all 🙂

Are you trying to quit smoking? How are you getting on? Have you kicked the habit yet?